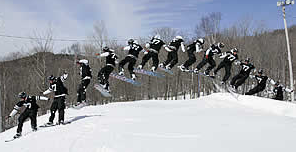 I was told I had Marfans Syndrome at about the age of 14. I was checked yearly to see how my heart was, and how much the aorta was expanding. Professor Pepper then introduced me to the new PEARS surgery. This was in September 2008. As he was telling me about it, I was told I would need to have it sooner rather than later, “me thinking in about a year”, Professor Pepper asked if a month would be ok to get myself prepared for the surgery.

I was already booked onto a snowboarding program, in January which I had been looking forward to for months, in which I was to train to become a snowboard instructor, and I could see with surgery getting in the way I wouldn’t be able to go, and argued that I could have it when I came back in April thinking a few months would not make any difference. However, my difficult mother was in the room as well, and instantly jumped in and rather nicely made the decision for me  to have it at the end of September. I was promised I would be fit by January to go to Canada, and it would be to my benefit to have it done, as it would be safer.

September came round very quickly, as I arrived at the hospital the day before the surgery I was pretty scared, I’m not going to lie, in my eyes it just didn’t seem the right thing to do, and I kept thinking it was going to ruin my trip of a life time in January. The most depressing day went past in the hospital and as the evening came closer I thought to my self what am I doing, left the hospital and went to  the park across the road where I contemplated doing a runner and going back home. Before I could do anything the mother found me and told me I had to have it and so I returned to my hospital room, which I was sharing with about six 80 year old men, just to make my stay even more enjoyable.

The next morning I was woken up early. At around 8.00am I was taken down to surgery. After that I woke up, had no clue what was going on with a tube down my throat in some room with my mum and dad sitting next me. Don’t really remember much after that and the next time I woke up I was in intensive care. I stayed there for another two nights, which was a bit of a nightmare as there was this old lady who looked pretty ill, but she never slept and was hallucinating and making a right old noise, oh well plus I had quite a hot nurse which made things quite a lot better.

Day 3 and I had moved back with my old men, who were telling me about how good Canada is and how much fun I was going to have when I went out in January. I still wasn’t sure if I was going to be able to go, as sometimes my mother isn’t always right however sure she thinks she sounds.

After four days I was ready to go home, and I couldn’t wait to get out, after I breezed walking around the ward corridors and oh yes the flights of stairs, the physio was ready to let me go home. Just before I left he gave me a booklet of exercises I could start to do when I was starting to get better. These involved washing up and dusting. I looked at him and said “yea right” and handed it back to him. There was no way I would be doing housework chores, I have three brothers and I was going to milk it as long as possible, this lasted about three days before they clocked onto me, hahahaha.

The next six weeks was the longest ever I was just sitting about the house not doing much, until I got to the third week where I decided I couldn’t sit about for another week and dragged my mum down to the doctors to get me signed off so I could drive and go and see my mates, she agreed as I had been driving her barmy and I don’t think she could wait to get me out the house.

At the end of six weeks I was feeling a lot better, I was going out a lot more and on the sly was starting to go to a few bars and clubs. The recovery process was relatively quick and, I was told I could still go to Canada. I had to go to get signed off officially by the professor so we went back up to London again, where we saw this guy who I had never met before but said Professor Pepper couldn’t make it, and he would be signing me off, after he told me I could go (snowboarding) but I couldn’t do any jumps whilst out there (yea right).

Three months on from the operation and I was at the airport with 140 other students that would be my new friends as I went on the snowboarding course ski le gap. The three months was the best time of my life, and by the end of it I was a level 2 snowboard instructor and was able to do 540’s of Olympic jumps, which shows how quickly the recovery process is.

To date the surgery has had little affect on me, and I am back up to full health. I am looking to make my career as a snowboard and tennis coach in Canada. I thought having the surgery would hold me back, but it has had no impact what so ever, and although I was scared at the beginning I am glad I had it earlier rather than later as I can now move on with my life, I hope as I am writing this the day I have got my final check up at the Brompton to make sure nothing went wrong whilst out in Canada.

I would like to thank professor John Pepper and Tal Golesworthy for giving me the best surgery and for helping me realise that it was the best option for me even though I was hell bent against the idea.