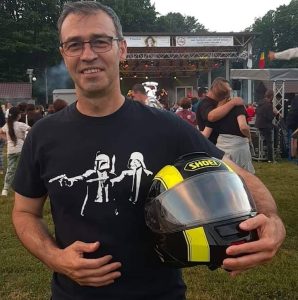 My name is Marin Mircea. I am 52 years and I am from Romania.

As a child I was a sports guy and I did all kinds of childhood stunts. I did performance judo and I had an enviable health and physique.

In December 2018 I had a sudden increase in hypertension (200/100) which made me do more detailed checks at the cardiology office. The electrocardiogram was perfect but in April 2019 following an echocardiography I was detected with an ascending aortic diameter of 5 cm. With treatment and diet my blood pressure dropped to 120/80. I had no symptoms or chest pain (except a throbbing chest that I did not give any importance to) and nothing changed my athletic performance. I had looked at the last echocardiogram that was done in 2006 (I was 37 at the time) and my aorta was at 3 cm in diameter.

Now in July 2021 (I am 52 years old) my aorta measured 54-56 cm before surgery. For 2 years I monitored the growth of the aorta and the surgeons in Romania told me that the only option in my case would be the classic operation with changing the aortic valve with a mechanical one and the aortic segment dilated with a special tube: total root replacement or “Bentall”.

My wife has a deep vein thrombosis and knowing what life with anticoagulants means, she looked for another type of operation and that’s how she came to the article: “The British engineer who designed his own prosthesis”. Because no doctor in Romania recommended PEARS surgery to me and I did not receive support from the Romanian insurer, I decided to go on my own and so I arrived in March at the IKEM Institute in Prague where I met Professor Jan Pirk and he gave me all the details about the PEARS operation. Despite the pandemic and with the Czech Republic in the red scenario, I managed to stay and undergo the necessary analyses and measurement for manufacture of the prosthesis.

I showed up at 7 o’clock in the morning at IKEM Prague. The hospitalization took place quickly, everything was planned and on time. I was given a single room equipped with everything you could want, you couldn’t be bored. Very kind and nice staff, a nurse offered me the best coffee from Prague that came to my heart. I was visited by Professor Jan Pirk, he asked me how I felt and if I want to ask him something, I answered that I was well enough informed about the operation. He made a funny joke, smiled and told me everything would be fine. I will be the 49th patient with PEARS at this institute.

I spent my day watching TV, I didn’t think about what would happen next, I was glad I got there. I had blood samples taken and in the evening at 10 pm I was shaved for surgery. I took a shower and fell asleep.

I was woken up by the staff at 5:30, I had a restful sleep. Preparations for the operation began, I took a shower, I was moved to a bed for transport to the operating room. The nurse who offered me coffee on the first day, because that’s how I remembered her, approached from behind over my head, put her hands on my cheeks, I felt a pleasant relief, and she told me that I am in the hands of the best and she told me bye-bye.

I was transported to the operating room; above all kinds of spotlights, all kinds of equipment around me and in less than 5 minutes the room was filled with medical staff, everyone doing their work as if they were like very relaxed sprinters. Then a lady came to me, I think she was the anaesthetist, and she told me that in 15 minutes the surgeons would come. I think I received anaesthesia because I woke up as if from a normal sleep, I opened my eyes and saw a light in the ceiling that was different and I realized that I was not in the operating room but I was not sure if I had had the surgery. I realized then when I found that I had a pretty thick hose in my mouth that didn’t bother me at all and a nice young nurse came next to me. She said hello, asked if I was fine and I shook my hand I don’t know if I fell asleep then but I know I was wondering why I don’t have any pain in my body. I started to shake my head to see the dressing over the operation. I was connected to a lot of devices with thin hoses in my stomach and neck and a urine tube.

That’s when I realized I had had surgery and was in intensive care. My mind wondered if the room has windows or was it night outside; after a while I asked what day it was and I understood that it was 24th. I think I understood that it was the night from the beginning of the 24th. I was constantly monitored by a nurse. The following that I remember is that I saw next to my nurse another pretty young woman who said hello and the other bye-bye. I realized that the morning shift had changed and I could see the light in the window, I asked the nurse what day it was and she answered me. It was clear it was day 2 after the operation.

Now I saw the light of day and wondered why I felt no pain. I could see the thick tube coming into my mouth and later it was taken out of me and I didn’t have any unpleasant sensations. I felt more comfortable, I could see the other hoses that were stuck in my stomach, throat, urine tube. Above my head were some automatic dispensers (I think they dispensed painkillers and medicines) and some monitors. Before the operation, I read on the Exstent site the story of other patients with PEARS who said they had a button to press to receive painkillers. I was wondering where the button was but it probably didn’t exist because I wasn’t in any pain.

Later I was moved to another room where my closet with my luggage was brought. I was happy when I saw my glasses. Then a nice nurse brought me the phone and told me to talk. It was a big surprise, my nephew, Raul, and my wife were on the phone. They were very happy and surprised when I told them that nothing hurt.

I ate my first meal from a nicely arranged tray and drank a cup of coffee that I liked. Until the evening I called my friends and then I had dinner and had a restful sleep.

In the morning there was a medical visit. I was asked if I felt well or if I had pain and they told me that the operation was ok. I was still wondering why nothing was hurting. I was moved to a room with three beds and I had a colleague in the room. I had a great view of the windows natural light, benefited from all the comfort. I got rid of the urine tube and I was helped to take a shower and I took the first walk down the hall under the supervision of the medical staff. It was fantastic, I was walking, I had no pain, a little dizziness. I spent the day talking to friends on the phone and watching TV.

The morning weighing showed me at 74.5 kg compared to 71 kg when I was hospitalized; a normal day with walks in the hallway and a surprise: I received a visit from my wife. She was pleasantly surprised by how good I looked and the fact that I was not in pain. Later a new colleague came into the room, Peter, with whom I got along perfectly.

Normal day with walks, TV. I was notified that I would leave on Thursday.

I was sent to take a shower, my bandage and corset were changed and the last catheters were removed from my neck. I said goodbye to the medical staff, a staff as nice as they were professionally trained. Raul came and I went to the rented apartment in Prague where I met my family.

I stayed in Prague until August 12, the recovery went well, I went for daily walks with my wife and I enjoyed the beauties of the city. We had no special events except a few episodes of arrhythmia, maximum pulse 80 and stabilized at 60-70 beats, a maximum temperature of 38 C with the remaining range 37 to 36 C. My blood pressure ranged around  110/70 maximum 120/80 without medication, and I experienced no pain. At night I slept in the armchair with my legs outstretched with my head up to avoid turning. I was sweating a lot and I changed every 2 hours.

On August 12, I flew back to my country, it was a pleasant flight without pain and let’s not forget the corset I wear even now when I am writing almost 3 months after the operation.

I continued with daily walks (my body would go without limit) and in November I will perform the first checks at IKEM Prague.

I thank Tal for his invention and I recommend this intervention. I thank Professor Pirk and his team, I thank the IKEM institute. You are the best!