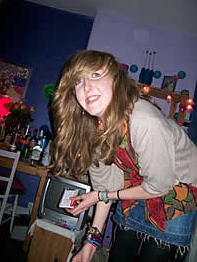 My name is Ami and I’m 17. I’ve grown up knowing I’ve had Marfan Syndrome, having been diagnosed as a baby. Having Marfan Syndrome has never really affected my life, other than regular visits to the hospital to see various specialists. I’m the only person in my family with Marfan Syndrome, so through-out my life I have constantly been surrounded by the attitude of “just do as much as you feel comfortable with”, which I feel is a positive one to have. Talk of heart surgery has been ongoing, but when it would happen was never really known. I was taking two different beta blockers to lower my blood pressure, and when I was about 14 my aortic root measurement was about 4.8cm. It then became apparent that I would need to have something done sooner, rather than later.

It was always thought I’d have the root replacement operation, until my parents heard about the ExoVasc operation at a Marfan Information Day. They were in contact with Tal, and were of the opinion that would be the better option to go for, however the minimum age requirement was 18, and at this point I was only 15. Due to this reason, and the fact that it was a new operation still in it’s pioneering stages, I wasn’t too struck on the idea. I just wanted to get this operation over and done with, and the sooner that happened, the better really. However the age limit was then reduced to 16, so 2 months after my 16th birthday, at the end of July 2007, I travelled to the Royal Brompton Hospital where I would become the 11th and youngest person to undergo the ExoVasc procedure. I didn’t feel particularly worried about the operation, but more anxious to be finally having it done. I just wanted to get it over and done with, so I could enjoy the rest of summer and be well enough to start college in September. A lot of my time spent in hospital is a bit of a blur. I remember waking up in a dark room, hooked up to machine and with no sense of time. I didn’t feel much pain, however the most painful part I recall was when I had two drainage tubes taken out of my chest and the stitches pulled shut. All I wanted to do was sleep, but was being encouraged to walk around the ward to build my strength back up and get oxygen going around my body to fully re-inflate my lungs. I had no appetite and constantly seemed to feel really hot. I also felt sick, and during one of my finest moments one night, I was sick all down myself and mildly missing the nurse! Lovely, eh?!

I came home on 29th July, 7 days after I’d had the operation. Other than the fact that it was quite uncomfortable to lay down and sleep at night, I felt alright. I carried on with the walking and would go around our neighbourhood, gradually increasing the distances. Within about a week I was feeling completely back to normal. I, and everybody else were all surprised and pleased at how quickly I’d recovered. In September I started college like the rest of my friends. I am currently in my second year of A Levels, studying Law, Journalism and English Language and hope to go to university this year to study Law. I am grateful that I can go out and enjoy myself with my friends, without the worries of a major operation or having to take medication. Since the operation I have been on no medication, and my scar has pretty much faded completely. When I look at the situation I could have possibly been in if I’d not have chosen the ExoVasc operation, I am grateful that I was in the position to be able to successfully undergo the surgery.